The Evolution of Digital Night Vision

In my last blog, I shared my experience as a part of the team that developed the Army's digitized warfighting concept. In the formative years of the connected battlespace, rapid technological evolution drove changes to the Army's warfighting doctrine. In the past six months, I have had the privilege to work with one of the leading technology innovators in night vision. I can't help but notice how night vision technological advances are the driving force behind many of today's operational innovations.

Digital night vision is driving dramatic improvements in our warfighters' ability to shoot, move, and communicate. Those changes have almost singlehandedly caused a reinvention of command and control at the squad, platoon, and company levels. This year, Benchmark partnered with SIONYX, a digital night vision technology leader, and I have been fortunate enough to support this relationship. I am constantly amazed at the technology we are providing to our service members.

Technology leaders like SIONYX partnering with other U.S. Department of Defense suppliers have significantly advanced night vision technologies. Today's night vision goggles integrate all of the C3I technologies (command, control, communications, intelligence) in a single tool, turning every Soldier on the battlefield into an intelligence-gathering node, communication portal, and lethal warrior.

Looking Back at the U.S. Army's Night Vision

To illustrate how much night vision technology has changed in the past 30 years and how those improvements are revolutionizing mission execution of today's tactical forces, I will take you on a somewhat comical (but very truthful) journey. Here are some typical scenarios (written from an old warfighter's perspective) of nighttime operations using night vision technologies. We will begin with PVS-5s, then PVS-7s, and finish with examples of how today's forces benefit from the technologies integrated into the newly-fielded Integrated Visual Augmentation System (IVAS).

As a young Army officer in the late '80s, I regularly used the Army's "standard-issue" night vision 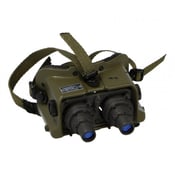 goggles (NVG), the PVS-5. The goggles were used in both training exercises and combat. Since night vision wasn't yet available to most of the world's defense forces, NVGs were deemed "sensitive items," monitored as closely as a soldier's weapon. Keep in mind that PVS-5s were big, bulky, and heavy to carry (see picture). To use them, you held them up to your eyes with both hands like binoculars. Despite these drawbacks, those goggles gave soldiers the ability to see in near-total darkness. Before you get too excited by that concept, I have to qualify that statement–those goggles allowed soldiers to see in the dark but only in a limited way and in contrasting shades of green. Typically, a person could make out shapes fairly clearly and see well enough to navigate with a low-to-medium degree of confidence. But while using PVS-5s, a soldier had to sequence multiple tasks to move, shoot, and communicate.

For example, when navigating, a Soldier would use his/her compass without wearing the goggles to shoot an azimuth to a known point, determine the critical path, and prepare to move following that azimuth. Because soldiers needed their hands free to accomplish those tasks, they would keep the goggles hanging around the neck. Then, when it was time to start moving, one or both hands would be occupied holding the goggles up to their eyes. And, because PVS-5s provided limited depth perception, soldiers were often befuddled as to exactly where the bumps, holes, obstacles, or cliffs were relative to their location. If they had to use their compass to adjust azimuth or talk on the radio (which happened very frequently), they had to put down their goggles, talk on the radio, adjust their course, and then hold the goggles to their eyes again to continue the mission. Imagine doing this dozens, if not hundreds, of times in a single night mission. Once you reached your objective, because of an almost complete lack of depth perception, you were often left wondering what your location was relative to that of the enemy.

Additionally, because of the lack of clarity in what you could see through the goggles, you had to make an educated guess about what vehicles or capabilities the enemy possessed. Finally, because you couldn't wear the goggles on your helmet, the sequencing of critical tasks was slow, and, in the end, both enemy and friendly unit locations were best guesses.

The U.S. continued "owning the night" throughout the late 1980s and early 1990s because most of

the world's fighting forces still didn't have access to NVGs. The Army replaced most outdated PVS-5s with the next generation of technology called the PVS-7 (see picture) by the mid-1990s. With the new technology came a new design, a single-tube technology that combined the "sight picture" through a single optic. The goggles could be easily mounted onto a soldier's helmet and featured a hinge to raise and lower them quickly, speeding up the tasks mentioned earlier (shooting an azimuth, laser range finding, map reading, etc.). The leap ahead from the PVS-5 to the PVS-7 reduced the strain from constantly raising and lowering NVGs from your eyes and vastly reduced the time necessary to transition from task to task. Additionally, the Army eventually added an infrared (IR) light feature to identify friend or foe (IFF), map reading, and enhanced clarity in the site picture. However, while the IR light attachment aided with the tasks mentioned above, there was no laser designator feature and no integration of the night vision sight picture with the rifle scope.

With the new digital night vision technology available today, our soldiers can see in the dark with nearly "day-like" color schemes, not just varying degrees of green. Depth perception is greatly improved, avoiding the scenarios of the past where it was difficult to see whether something was 30 feet or 30 yards away. With today's technology, soldiers can navigate much more easily and quickly while significantly reducing the risk of bodily injuries from collisions or falls. Soldiers can now plot waypoints and use the goggles to navigate between them.

The new goggle systems allow soldiers to laser-designate targets, measure distance, get an azimuth, and locate/report enemy forces with an extraordinary degree of accuracy. Then, almost instantly, the designated enemy location's grid coordinates are shared with the command and control center and the other soldiers in the unit, creating a shared view of the battlespace. This shared view improves fire coordination, reduces fratricide, and makes moving, shooting, and communicating infinitely more manageable than it was just a few years ago. Essentially, the new NVGs turn every Soldier into an intelligence node, sharing photos and videos amongst each other and command centers. Never before has such a powerful integration tool been given to our fighting forces.

The new night vision capabilities provide many advantages to the individual Soldier, but perhaps most importantly, they are a "leap-ahead" technology in the connected battlespace realm. The value of thousands of connected data collection points on the battlefield is almost incomprehensible to a Soldier that relied on PVS-5s to get from point A to point B. In addition to pursuing his/her mission, every Soldier collects data that leaders at every level use to outsmart, outmaneuver, and outgun our opponents. Integrating those technologies in a single system allows our forces to "own the night" unlike anything imagined before. I am proud to be part of the team that has developed these capabilities and made them a reality.

Rick Gronemeyer is a business development executive in the Aerospace and Defense sector at Benchmark, Inc. He graduated from West Point and served 26 years in the Army, retiring in 2013, and has vast experience running large supply chain management organizations for four fortune 500 companies (John Deere, Rockwell Collins, Honeywell, and Celestica). Rick hails originally from Iowa and is an avid football fan of the Army, the Iowa Hawkeyes, and the Green Bay Packers. He holds a BS in Engineering from the United States Military Academy and an MSA from Central Michigan.