Celeste Bean – A Thorn among Roses

As my first full-time job after finishing graduate school, Benchmark has given me opportunity to contribute to projects across a huge breadth of fields, ranging from high-power electric vehicle chargers, to tomorrow’s solutions for 5G wireless problems, to peer-to-peer mesh communication for soldiers.  Additionally, in a testament to Benchmark’s catering to all types of design services, I’ve been able to contribute to all stages of our projects, from the nascent stages of conceptualization, to PCB design, rapid prototyping, test, and design for manufacturability.

We’re able to leverage the many years of experience from our global network of engineers in Minnesota, the Netherlands, and elsewhere, and my team’s senior hardware engineers Scott Wofford and Scott Fink offer encyclopedic mentorship everyday (in part because they sit in the cubicles adjacent to mine and can’t run from frequent questions). 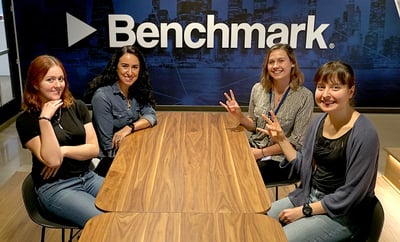 Although working at Benchmark feels natural to me now, my decision to pursue engineering was unexpected. As a kid, I never displayed the tendencies that seem to foretell a future as an engineer. I obsessed about animals, instead of trains or airplanes. I fancied myself an artist, rather than a Lego savant—although, having recently revisited some of my early works from my Blue Period, perhaps it’s best I’m an engineer.

I initially went to school with the expectation of majoring in behavioral economics, but I realized within a year that taxes were not my life’s passion, much to my surprise.  One of my classmates in a math class told me that there was no way I’d be able be to compete in engineering classes, so I decided to take an introductory programming class.  It turns out that engineering actually offers inexhaustible opportunities for creativity, as well as means to solve today’s problems and preempt tomorrow’s.  I was hooked (and ended up tutoring the other guy). I switched my major to Computer Engineering and went on to pursue an MS in Electrical Engineering, focusing my thesis on integrating renewable energy and the power grid. 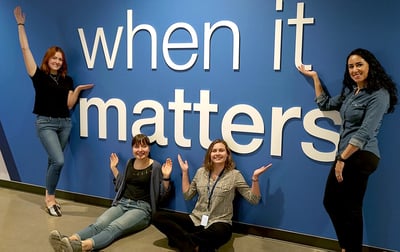 Along the way, many women mentored me, and I held many positions allowing me to pay that mentorship forward to younger engineers, even receiving my department’s Outstanding TA award for both years that I taught during graduate school. Choosing a company committed to expanding the background of its employees was a big priority as I looked for jobs.

Even my introduction to Benchmark spoke to its emphasis on diversity: I met my manager, Bobby Sumners, at an annual conference for the Society of Women Engineers.  I was the first woman to join the quickly growing Tempe Design Center of Innovation in August 2018, but since then, we’ve added three very talented women to our team.

Benchmark’s executives have also managed to create a remarkably inclusive atmosphere between employees and the C-suite, allowing us to diverge from the intransigent hierarchy that would typically define a 40 year-old company with approximately 13,000 employees.  We recently held our first ever Ping Pong Tournament, and our CEO Jeff Benck, VP of Global Operations Mike Buseman, and CTO Jan Janick signed up to battle it out via a small plastic ball.  Jeff even finished off the tournament with an exhibition round against our champion!  (Spoiler: the champion retained his title.)

Connected Devices About Us

Celeste Bean is an electrical engineer in Benchmark’s IOT division, with interests in power optimization and control theory. She joined Benchmark in August 2018 after completing a BS in Computer Engineering and an MS in Electrical Engineering at the University of California, Santa Barbara, where her thesis focused on improving the integration of renewable energy sources to the power grid. She is now remotely pursuing an MA in International Security Studies from the University of Arizona.