Engaging the Client Where They Are: Learning from Working with the U.S. Military in the Field

We asked Scott Wofford to answer a few questions about his time working as a U.S. Government contractor in Iraq and Afghanistan.  He describes how his amazing experiences working under extreme pressure helped him prepare to work with customers at Benchmark’s Tempe Design Center of Innovation today.

(Q) Can you describe an interesting / unique / memorable moment you had in Iraq or Afghanistan while fulfilling your military customers' requests?

(A) It’s hard to pick one day, one thing; there were so many. Some good, some bad, but all memorable. All three of my tours (two Iraq in 2003 and 2007, one Afghanistan) were done in vastly different time periods of the same conflict.

The one thing that stayed consistent in my experience was the ability to embed ourselves with small combat units at the company to brigade level. This gave me some of the most satisfying experiences at a professional and personal level. I was able to work in the same conditions as the client I was serving. I was able to interview them and derive what the biggest issues were that were impacting their ability to perform their mission. I got to experience most of the frustrations & limitations first hand. I was able to gain trust by combining my technical viewpoint with their tactical assessment and seek a solution that meant both vantage points. This is not easy when you’re thousands of miles away and interpreting requirements that are often out of context.

Out of this came several programs that started out as “McGuyver” style prototypes that lasted for a partial mission but showed promise and evolved into programs that went into volume production that took hundreds or thousands of man-hours to fully engineer. My biggest joy was to be on the tip of one of these during the early development stages, figuring out how to make something work from the bag of spare parts I had in our lab and could scrounge from other broken equipment. Then, giving it to a group of Soldiers just to have them come back a few days later and tell me this saved a life, or this helped us catch a bad guy, or this found a IED that could have made for some one to have a bad day. Often times, those early prototypes would come back broken, shot, burnt, or just missing in action, but you know you had a hit when the user’s typical skepticism changed to enthusiastic acceptance and their continued involvement of making the next iteration better.

(Q) Describe your actual position as a military contractor. What was your formal responsibility? What military branches did you support?

(A) In 1999 I was hired as a lead designer for a company that had just won its first military contract. The company was given $1M and 90-days to prove a concept to solve an issue with the U.S. Army’s Land Warrior program, and they did. They were then awarded a multi-million contract to expand the concept into a viable system that could survive the harsh environment a typical Soldier would expose it to during training events. The end goal was to train up a full platoon (40 Soldiers) and a Company command element and jump them into the box at a major war games event and see how the capabilities impacted combat effectiveness. This may be a whole other story than what we did in Iraq and Afghanistan, but the end results that bridged these two experiences was the ideal of spiral development where you prove a capability by rapid prototyping using COTS (consumer off-the-shelf) components followed by field trials and focused user feedback.

This group formed the nucleus of what later became the Rapid Equipping Force which combined Army officers and NCO with engineers and scientists to solve problems by direct observation in the battle space and by interviewing the Soldiers whose mission was focused in that battle space. By May of 2003, we had setup the first REF lab/ office in Iraq and were formally handed off to 3ID. I, in essence, became a door to door salesman traveling in a soft skinned HMMWV with a Sergeant First Class all over Baghdad, Tikrit, and Mosul to introduce the capabilities of the REF and demonstrate the technologies already in our toolkit.

Besides not being shot at or bombed yet at Benchmark, we have A/C, internet, and a vast array of dining options for lunch. Seriously though, there is a shift in the end user. - Scott Wolford

By 2007, we had a much bigger lab and were able to get routine care packages from CONUS to supplement our lab consumables (and our snack pantry). We also had a string of successes with IED detection and defeat, ISR systems, and force protection technologies. The mission had morphed from trying to take early success (the cave inspection robots) and shoehorn them into solutions for completely different problems. In the lab, we had a Senior manager and an engineer…me. The mission was right at the beginning of the General Petraeus Surge where the mission changed from a garrison posture to pushing units out into the Baghdad neighborhoods to provide a permanent presence in either Iraqi police stations or military outposts.

Most our work focused on investigating technologies for detecting IED’s and providing better situational awareness to the small combat teams that had to occupy and share space with the Iraqi police or military in those Joint Security Stations. These were in Baghdad neighborhoods where tension between Shiites and Sunnis were always bad and made worse by insurgent actions to provoke the violence. We had a couple big name success coming into 2007, MARCBOT was in production and the first 1000 systems had been in theater for a couple years. We were working on other robotic platforms that were designed to perform niche role at an economical price compared to typical multi-purpose EOD platforms. We had developed a series of wireless cameras and audio recording devices. The robots and ISR product all worked off standard military batteries which made them simple and cost effective to support. The REF lab was specifically requested in the spring of 2007 to look at augmenting the Force Protection technology at the various JSS’s in Baghdad. The issue was that these JSS’s were in very bad areas with lots of violence to U.S. and Iraqi personnel. The small outposts were no bigger than a local police station. The Army would build up these areas and place T-walls and Jersey barrier to fortify the station. In so doing, they would reduce the ability to see what was going around the local neighborhood. We were asked to provide a rapidly deploy-able surveillance system that would restore and augment lost situational awareness. RDISS was born in early spring and went into production by summer of 2007. I did three RDISS install missions before I left theater in July of 2007. These were always a challenge just because the installation conditions were never the same, not to mention that all work had to be done in full body armor and mostly at night in complete blackout conditions…oh, did I mention it was now summer in Iraq too! 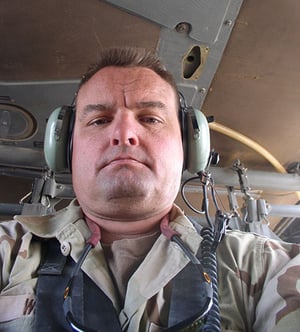 I did my last tour in 2012 to Afghanistan. Between leaving Iraq and going off to Afghanistan, I did several years of work on advanced Soldier systems for Natick Soldier Research, Development and Engineering Center which kept me mostly stateside until late 2009 when the NSRDEC work tailed off. The REF decided to act on a concept that my team had proposed several years earlier. The premise being that if we could put talented engineers and scientists in theater to help develop technology solutions on the fly, what could they do if they had a better toolbox and ability to travel with it? From this concept, we took a 20’ connex and stuffed it full with all the tools needed for rapid fabrication including 3D printing, CNC machining, forensic microscopes, welders, plasma cutters and anything that said Dewalt on the case. The result was Expeditionary Lab- Mobile (ELM). I took the first ELM to Kandahar in May of 2012. It was amazing what could be done by whiteboarding and sketch mockup and how fast that could translate into a usable prototype in just a matter of days. This really helped to expand my skills and concentrate our overall service to the warfighter.

(Q) How is working in a growing Tempe Design Engineering team at Benchmark similar to your experience as a military contractor?

(A)  I think the biggest overlap is the need to build team unity and shared vision early and make sure you have the right team personnel to make that work. I know many good engineers and scientists that just were not cut out to be in theater. They couldn’t deal with the frustration and limitations and they couldn't often divorce themselves from their technology biases. I think growing IoT and solutions engineering has some overlap there. We need to be careful we capture an accurate problem statement, not what the customer or the Benchmark management wants the solution to be, but make sure we adapt the relevant technologies in the simplest and most cost effective approach possible.

(Q) Are you applying lessons you learned working with the military at Benchmark in the customer development process?

(A) Most definitely. As stated above, you need to engage the client, get to the root cause of the problem or issue, gauge their acceptance and commitment to a plan, then figure out the right approach.

(Q) How is it different?

(A) Besides not being shot at or bombed yet at Benchmark, we have A/C, internet, and a vast array of dining options for lunch. Seriously though, there is a shift in the end user. The military experience had a common themes whereas IoT clients are very broad, and getting inside the problem space take a lot of due diligence and ability to shift the technology paradigm. Typically, in military technology development, we are creating closed systems, systems that must work with little or no infrastructure. IoT is all about leveraging the available infrastructure and making something that meshes efficiently with it.

Scott Wofford is a Principal Engineer with Benchmark Electronics’ Tempe-based engineering design center where he has leds development efforts on critical NPD programs. Mr. Wofford has over 30 years of experience in multiple technology focused industries. He is a graduate of Arizona State University’s electrical engineering program.